It’s time to do the right thing

But before any doing comes being.

Are you being anxious? Worried? Or enthusiastic? Confident?

We’re taught to “fake it until we make it” and that it’s all about attitude. Those are two powerful ways of being.

But how well do they that work in real life? Especially when obvious facts contradict what we believe, and how we “be” – how we are being?

For example, is it wise to be confident that COVID-19 is a hoax, or that the scientific method is a sham, when there is, well, no evidence to support that confidence?

My grandmother and mother died because the belief system that was the foundation of their being didn’t allow for life-saving clinical care. I was there for my mother during her transition, and she was confident that, as she said often, she “wasn’t going anywhere.” Well, while her attitude was great, her physical presence certainly went away.

At what point in our being do we allow denial of the obvious to trump our beliefs?

There’s an obvious answer to that question that’s based on centuries of human experience. You can find that answer in the writings of monotheistic mystics from around the third Century CE until the present, and in the great wisdom literature of the Hindus and Buddhists, as well as in the nature “religions” of indigenous peoples. Playwrights, poets, novelists, and songwriters of all races and nationalities have offered answers to that question.

Not many of us have time to engage that deeply with the wisdom of the ages, so let’s answer the question right here and now. You can do your homework later.

You see, most of us, whether or not we know it and embrace it, are living out the answer to that question day by day.

Gentle people! Under threat is no way to be! Doesn’t matter how confident you are of your beliefs, or how great your attitude is! Denying the obvious is like living in a foxhole while mortar shells and rockets are falling all around, trusting that the power of your beliefs will keep you alive while ignoring the armored transport that’s waiting urgently for you to climb aboard and ride to safety.

We’ve all heard the story of the man on his front porch, surrounded by a huge flood. A rowboat comes along and offers to take him to safety, and the guy laughs and says “No! God will save me!” The flood waters rise and the man climbs up to his second floor. He’s leaning out the window and a Red Cross motorboat comes by. The guy hears a megaphone from the boat offering him a ride to safety and he waves his arms and yells happily “No thank you! God will save me!” The water rises higher and the guy escapes to his roof. A helicopter comes along, drops a rope down to the guy, and over the loudspeaker he hears the message: “Grab the rope and we’ll save you!” The guy waves the helicopter away confidently yelling “NO! God will save me!” Finally, the flood waters rise over the roof and the man is swept away and drowns. Since he’s a believer, he goes to Heaven and meets God, and the guy, who’s glad to be in Heaven but quite shaken up in his beliefs at that point, asks God “I was happy and confident, so why didn’t You save me?” And God says “I sent you a rowboat, a motorboat, and a helicopter…why didn’t you let me?”

Don’t get me wrong: the great wisdom of the ages admits to the potential for miraculously surviving all kinds of crazy with your belief system intact. But there’s a moment when being a certain way must change, and, like the man who drowned in the flood, it just doesn’t make sense to resist the change just because it doesn’t appear to be a miracle.

The guy could have done the right thing. He got three chances, but it was more important to cling to his version of what God would do than to accept the obvious way of being – a way that could have saved his life.

This goes beyond religion of course, and beyond science. It extends to politics, money, sex, gender…you name it. In short, if it can be discriminated against, you can be quite certain there’s a belief system denying it.

All kinds of crazy can be gathered under that umbrella, from anarchy and fascism to religious fundamentalism to greed to hate.

Sadly, all kinds of good can also fall prey to belief systems with built-in denial: my good mother and grandmother had strong faith, but they missed the obvious rescue offered to them. In a more macro example, consider the religious faith of people who both accept LGBTQ+ church leaders and those who do not. Which way of being is right? Which of the good, well-meaning people on either side of partisan issue are right?

Well, that last question probably tested the limits of your fairness, but we need to grapple with it or risk escalating conflicts that are actually quite simple to resolve.

So back to where we started: it’s time to do the right thing.

Unless we end dialogue.

Or ignore the guidelines of “purfuit of life, liberty and happineff.”

Or ignore the rule of law.

The trouble is we’ve made so many laws that are exclusionary that doing the right thing is no longer simple. We’ve boxed ourselves into a corner where we’ve more concerned with offending each other’s sensibilities than we are with accepting one another just as we are.

We’ve put up so many walls around our belief systems that we’ve forgotten the wonder of discovering solutions that work through inclusivity.

So can we just take a moment, breathe, and look around us with a fresh set of eyes?

Maybe we’ll see that the loudest and most violent among us don’t speak or act for most of us.

Maybe we’ll see that disruption without consequences doesn’t serve any of us.

Maybe we’ll see that we have more of a common purpose as friends than we ever had as enemies.

What is the right thing to do?

So, what is the right thing?

It really is that simple.

But it takes effort to do the right thing and be the right way. When the flood waters rise, we just can’t hang out on our front porch, second story, or roof when there’s obvious rescue right in front of us.

It takes hard work, vision, and discernment to do things that promote life, liberty, and the pursuit of happiness. Individuals have a chance to do this with each other right now. America’s Constitution and Bill of Rights are a great framework for the dialogue and enactment of laws to do this, and they also offer Americans a way to repeal laws that don’t. In many ways, as hard as the work is, there’s a kind of common sense about doing the right thing.

If we elect an American government willing to do the heavy lifting we can expect some improvement. But we won’t be able to elect that government until we Americans, as individuals, begin to do the right thing.

We can do that by restoring our interest in the vast majority of America that has been quietly doing the right thing for a long time.

For example, the offensive Mississippi state flag was removed in this way and, although it took nearly 165 years, it happened through inclusivity rather than exclusivity. It happened when offense transformed to acceptance. It was, as a Buddhist would say, a “skillful” response to racism in America. It happened not because of differences in belief systems but with acceptance of them. It happened because life, liberty, and the pursuit of happiness mattered more than their opposites.

Sometimes it takes a crisis to force us to consider the right thing. We have plenty of those right now, so the potential for doing the right thing has never been higher. The traditional and social media may eventually learn that advertising revenue sold by stories about the right thing sells better than its opposite, but the media and its trusting consumers may be the last to find out that the right thing has been percolating just fine under the surface, thank you. And that’s OK.

Those of us who are actually doing the right thing in whatever crisis will keep doing so. We will find one another and form collaborative, skillful alliances to support one another. Maybe that will look like education pods, or multi-family COVID-free zones. Work-from-home support teams. Personal shoppers. Small businesses that pivot to meet needs we don’t know about just yet. It’s a new future we can only live our way into step by step. And that’s OK, too.

It starts with you. What is the right thing for you to do? When you answer that question each and every time an opportunity comes your way, you can build a durable practice around doing the right thing. It will challenge your belief system. It’s supposed to. But rest assured: your belief system isn’t being dismantled, just tweaked. You may find the tent you thought was exclusively your own is big enough for others, too, just as they are finding the same truth in their own belief systems.

If that guy had stepped from his porch into the rowboat, his life would have been spared. But who knows what he might have learned from the other guy rowing the boat! How might that have changed them both? Alliances formed in crises often have that effect. Same for friendships that grow from the most unearthly situations: battle buddies, survivors, rescue workers. Why let our beliefs turn us away from the potential in those opportunities?

It’s time to pound a new stake into the sand, haul up a new flag, and offer one another a new opportunity for cooperation…not as competitors, but as friends. Will you join us? Join in an inclusive, accepting friendship for good? Join a collaborative power to do the right thing? We believe you will because we believe in you, and you’re better than all that’s gone before. It’s time to give something back to future generations that’s based on the best America has to offer, something useful, durable, grounded not in partisanship but in relationship, not in legislated equality but in liberty, where freedom means advancing not what divides us but what’s best about us.

Do the right thing.

Come to the Party.

A Party for the new America. 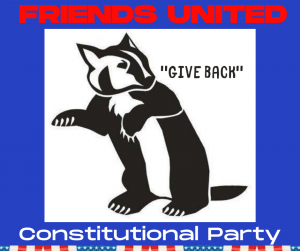