Have you ever watched those videos of show-off supercar drivers who wreck their McLaren, Lamborghini, Ferrari, Porsche, Audi, or Nissan GT-R?

Even though those cars are made for speed and performance, that kind of power demands a delicate touch, otherwise, catastrophe happens.

The opioid crisis in America ought to remind everyone that more medicine, just like more muscle car, can be lethal.

Bigger, faster, stronger, more, more, more…this hasn’t been good for all of us, has it?

Some parts of humankind are reaping the results of this greedy mindset: income inequality, unaffordable health care, racism, theocratic fundamentalism, sexism, debt…you name it. Those are things we can and ought to control, or we’re on a short road to a crash that could be fatal.

There’s more: while we argue about what color the social and economic solutions ought to be, natural resources are diminishing and natural disasters are on the rise – things we have the hubris to believe we can fix.

It takes practice, skill, and talent to drive a supercar well, just as it takes wisdom to use drugs effectively, or work toward economic and societal wellbeing.

If we could stop showing off and back off the gas, we might realize that there’s a lot of range between zero and one hundred fifty miles per hour – a range we have yet to fully explore, let alone use wisely.

Unlike supercars, there is something we all have in common – something that actually unites all human beings – something precious that actually sustains cultures who’ve yet to participate fully in the Industrial Age. It’s available universally, too.

In America, music is often used as an intervention: for relaxation, during meditation, or when we need to down-regulate for other reasons. Americans also use music as a stimulant: at the dance club, or during exercise. We Americans aren’t generally very good at musical subtlety and nuance, yet we do understand that music has power.

If it doesn’t either put us into a comatose state or give us an adrenalin punch, many Americans aren’t sensitive to the real power of music. We generally like to experience music as if we were trying to drive that supercar full-out with no skills and no practice.

While that can be effective in some ways, it’s not informed and certainly far from holistic! Plus, it blows right on by the entire spectrum of musical power between complete down-regulation and complete up-regulation.

And yet, there are skillful American sub-cultures where music thrives in a useful place between the extremes:

What we’re really talking about here is the skillful use of emotion. It’s much more than “intelligent” use of emotion; the brain can guide us, but it seems obvious that we need a more holistic way to embrace and use the powerful emotions that resonate in our entire bodies.

For example, there’s a whole spectrum of anger between blind rage and slight annoyance that we are generally untrained with and therefore unable to use. Same goes for fear: things that ought to simply worry us seem to immediately send us directly into abject terror. Pedal to the metal. See the nearby picture for how that looks then ask yourself: Can I dial up a reliable, safe, powerful experience of any emotion there, and use that energy for good? 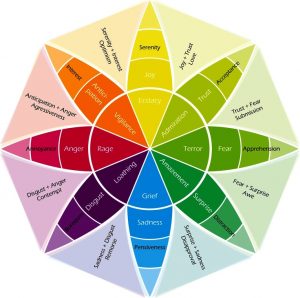 We’ve practiced exactly the wrong habits: suppressing or repressing those “negative” emotions instead of unlocking their potential. And there are entire command-and-control industries that depend on us doing just that. How has that worked? We are living the results right now.

The trouble with both supercar wrecks and intense emotions is that they sell advertising: we’d rather rubberneck a wreck than improve our own driving skills and the media moguls reward our depravity by serving up the juiciest, most stimulating stories they can find and calling it “news.”

Look where that’s gotten us….

So what does music have to do with this? How does skillful use of music help?

What could happen if we allowed ourselves to experience these powerful emotions safely, without breaking things or hurting people?

Music can give us that experience. Music – sound and rhythm – can modulate emotion. Safely. It’s possible to find an infinite range of emotion in music, provided that you can really listen to it at a level that goes beyond the intellectual.  You can also learn new skills to connect with those emotions in powerful ways. All it takes is un-learning what you’ve been taught about judgment and a new commitment to practice.

No: you don’t need to learn an instrument to do this, although that’s a great way to build emotional experience skills, too. We’re talking about skills that go far beyond just the accurate recognition of emotion – with practice, even the most intense emotion can be experienced safely and tapped for the useful energy it contains.

Honestly, for many of us, that first encounter with authentic emotion can unlock a flood of left-over emotional residue from a lifetime of trying to keep the lid on. Fortunately, musicians are good guides for us, since part of the practice of music is feeling and communicating authentic emotion.

Like really great sex, a powerful piece of music first gets your attention, swells into foreplay, reaches a climax, and resolves into afterglow. Often there are many emotions in great music, but sometimes there can be only one.

Also like really great sex, there’s a place in the afterglow where it’s possible to find emotional neutral: satisfaction sure, but with awareness, and an opportunity to make a skillful choice about what to feel next in full presence.

Who doesn’t want that? It’s exactly the opposite of the supercar adrenalin-junkie shock treatment.

Instead of music as reaction or intervention, this kind of musical skill is forward-directed, performance-enhancing, powerfully inspiring, sustainable, resilient.

But, again as with great sex, it takes practice. The complete experience of emotion allows that “negative” sense of the emotion to be replaced by a powerful, controllable energy – energy that can be used for good. Music can give that to you, provided you know how to listen for it.

What would it be like to make all your important decisions – even all your decisions – from a fully-empowered place, one that’s animated by complete awareness of the emotional power you have, even the power of what’s called “negative” emotions?

Think about it: humans are resonators for four basic emotions: fear, anger, sadness, and joy. We have incorrectly labeled half of those emotions “negative” even though the Famous Five Fs – fight, flight, freeze, feed, and … mate – are primary amygdala-based responses that have kept us safe and alive for millennia. That doesn’t sound so negative now, does it?

Sadness is useful and necessary too – we can connect to one another around the spectrum of sadness with compassion, empathy, humility, and even respect. Seems like that’s a powerful thing, especially when resilience is necessary.

It’s safer for those in control to suppress “negative” emotions in favor of what used to be called “progress.” We can see the results of that in revolutions, strikes, and all sorts of protests. Doesn’t seem like that approach has served us well.

Science offers us guidance and reassurance here: music that has the highest amount of tension and release per any given moment is the most powerful gateway to emotional energy. With this guidance, we can understand that electronic dance music, even at a fast tempo, is still not as powerful as the tension and release density in Classical music.

Sure, there’s no powerful kick drum on every beat in Mozart, but the tension and release in Mozart happens many times more per second than in pop music. The same holds true for Middle-Eastern and African music that many Westerners might not enjoy because of its tonal or rhythmic density.

It’s reasonable to be concerned about hostility in a crowd of people amped up on adrenalin-producing music of course, and this may explain many Westerner’s concerns with musical cultures they don’t yet understand. But the opposite side of that concern is that people experiencing powerful emotion are not necessarily going to act out on those emotions. Often, fans of a genre experience the opposite emotion one might expect, such as the death-metal fans who experience that music as joyous.

Skillful use of that kind of power by authentic leaders is big improvement over taking advantage of that power and provoking its violent use! On the other hand, trained military warriors who are tasked with violence have a different, practiced, and skillful way of deploying their powerful emotions. It’s important to use this power with skill.

In cultures that practice music as a part of daily life, people get this. Not at a scientific level, but at a holistic, life-affirming level. Quite simply, it’s always been that way: they music together. This is how Haitians practiced resilience after the earthquake, and how New Orleans residents found strength and hope after Hurricane Katrina. We saw it in Paris when Notre Dame was on fire and people gathered in the streets to sing. Often, in America, when a vigil is held for victims of a disaster, we sing together.

As banjo virtuoso Bela Fleck learned, people in many African cultures spend their entire days making music alongside whatever else they are doing, and they enjoy a much greater emotional fluency than the average American!

We can do more of this. We need to do more of this. From the C-suite to the solopreneur, we can’t solve the problems of the world using only the 25% of our emotional potential that we like; we must learn to engage the other 75% as well. It will be life- and world-changing when we do.

Want to know how? Browse through the content at Music Care or Practical Heart Skills. Start your quest with an active-learning fully-mentored course. Of reach out to a musician and ask some real questions about how emotion works in music.

Whatever you do, if you are willing to embrace the experience of 100% of your emotional capability without judgment, you will be on your way. With practice, you’ll be skilled enough to drive your own emotional supercar.