How To Overcome Your Inner Fears And Limiting Beliefs

If overcoming your really big, terrifying fear is where you are today, this article has some ideas about how to do that. If not, please continue here. We will focus in this article on a system for mastering the little annoying fears and their limiting beliefs.

It’s true that we often fear what we don’t know, or don’t understand. The little nagging annoyances that don’t rise to the level of being truly terrifying can build up a kind of residual energy if left unattended for too long. Let’s take a closer look.

Little fears can be good things when they keep us safe. Those kinds of fears aren’t “irrational;” they are useful and purposeful. Often there are very good reasons for them. Unlike phobias, the inner fears we want to discuss in this article feel more like nagging, unresolved resistance. Perhaps, for you, this kind of fear ticks one or more of these boxes:

Small but limiting beliefs swirl around these little fears, too. “When will I ever need to know how to swim?” or “This is silly: after this class, I’ll never go ballroom dancing” or “I’ve worked here for quite a while and I know the boss appreciates me… eventually, if I’m patient, they will offer me that that raise I deserve.”

Limiting beliefs and little fears feed on each other. Like the chicken and the egg, they often leave us wondering which came first. But whether we start with the limiting belief or the little fear, it’s possible to transform them both using the residual energy contained in them. That is, the nagging, persistent feeling in those little fears, can be the fuel to overcome them.

Let’s start with a real-life example.

When I was younger, I believed that stage fright could incapacitate me. I was afraid of losing my place in the music while I performed in front of people, even though I had a solid practice habit and great memorization skills. Oddly, for no reason I could determine, the fear I had was bigger than my trust in rehearsal and practice, and it fed my limiting belief that I’d freeze up on stage.

There are plenty of famous concert performers whose careers have been fraught with these kinds of fears and limiting beliefs. I didn’t want mine to wind up that way. 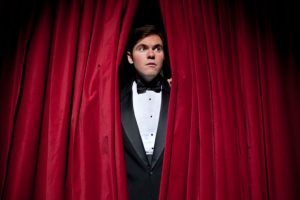 Have I ever messed up in front of an audience? Yes! Plenty of times. But, now that I’ve had practice with what it feels like to do that, I’m not as afraid of it happening again. Why? Because it turns out that audiences love an underdog who’s not afraid (the “fear” word again!) to try again.

Circus performers sometimes use this knowledge to manipulate audiences to a greater appreciation of what appear to be impossible feats of strength and balance by heightening the tension, usually through an intentional fall. “Third time’s the charm!” we like to say. This is a hat tip to the skill of doing it perfectly but played to greater effect by intentionally bringing the audience along for a “failed” first attempt. When the performance is finally done “right,” the release of tension produces a bigger audience response.

Disconnecting the Fear and the Belief

To achieve that awesome audience connection, we performers use all our skills, including the ones that we ourselves experience as fear. Can you imagine how it feels to be scared of going on stage, then doing so, only to truly mess up twice and, on the third try, find a sympathetic audience authentically cheering you on? Until that happens, fear and belief are inextricably tangled up together. Afterward? Such freedom! And, ironically, understanding of a new, useful skill.

Does this make sense? Perhaps you’ve been in an audience and seen how it works first-hand. This is just one example of how to unpack the power in little fears. It pays off to bring early attention to those little fears so that they don’t become overwhelming, debilitating phobias. An awareness of the fear plus active, intentional participation in playing that fear out “in real life” can often be enough to release the limiting belief around the fear, which is how it worked out for me with stage fright.

Am I still scared before a performance? Sure. But I no longer believe it will end my career! And, I have a better understanding of how I can use that fear energy to make the butterflies fly in formation.

Will you agree, for this discussion, that the fear and the belief associated with it are actually perceptions we make? We don’t need to argue about whether they are “right” or “wrong” because that’s not the point. What matters is ownership. Right or wrong, our fears and beliefs are seen and felt – perceived and experienced – by us, and we want to be judgment-neutral about them. Got it? Good.

Positioning ourselves as an experimenter with our own fears and beliefs helps us to be objective about them – to take a step back from being subjected to them. It’s easier to tinker with possibilities that way, wouldn’t you agree? That’s what we want to do now, to see how this system works as if we were observers, before putting it to work “in real life.”

Your Real-Life Fear and Belief

Now that you’ve seen how I unpacked my stage fright and the belief that it would end my career, let’s experiment with a little something that scares you. Start small here, because mastering the little fears is good practice for the big ones. Got it? Pick a little, nagging fear of your own, and here we go…your first steps with a system to overcome your inner fears and limiting beliefs

This system helps us find clarity about how things could change, then, in the next section, we can discuss how to take action. But first, here’s an example. (The asterisks show which item I chose to drill down through the three steps.)

A Little Fear I Have

First: How it Scares Me

(I’m not as scared by what might happen if it doesn’t involve me directly, so I’ve left those fears out of the list to make it clearer.)

Second: How It Limits Me (To Fear Distracted Drivers Running Into My Car)

Third: How Things Would Change (If I Wasn’t Afraid of Distracted Drivers Running Into My Car)

(Remember, this is just a thought experiment. It’s designed to open up possibilities that lurk in our little fears and our limiting beliefs about them.)

I chose this example on purpose, since all of us, I hope, have some level of concern for – and worry about! – driving safely. No one wants to get into a fender bender or worse! So how do we make what we’ve learned through this thought experiment practical?

Action to Overcome the Fear and Limiting Belief

In this thought experiment, we are unpacking a fear of distracted drivers. This little fear (to me) might be a bigger fear to someone else. That’s OK since this is just a thought experiment. The same system works for any little fear. Try it! As you do, remember that you are practicing safely as you work up to mastering bigger fears.

Now that we’ve imagined how things could change around this fear of distracted drivers, what action could we take to help make those changes real? For stage fright (or public speaking) the action is very clear: you walk on stage, with all the practice and preparation you have done, and give it your best shot. It’s a big moment. But distracted drivers are everywhere, so how do we practice to deal with them? In spite of laws and law enforcement, we can’t force other drivers to change. That means we must focus on how we can change. For myself, anything that makes driving more pleasant is worth the effort I can make, so, in this example, what might I do?

Here’s how I think about it. I’ll quote my stream of thought so you can see how the voice in my head talks to me.

The Voice In My Head

“I’ve always wanted to take a performance driving class. Mastering Tokyo drift probably won’t happen for me, but it would be nice to have some practice mastering difficult driving situations before they happen in real life, such as building skills and confidence to avoid collisions using evasive action or controlling my vehicle in an emergency skid.

“I don’t want to be a stunt driver (yet!) but there are things I can do to be a more capable driver. And, as long as I have to be on the road with potentially-distracted drivers, doesn’t it help me overcome my fear and become a better driver myself? And, if I can drive better, wouldn’t I also improve my odds of avoiding a collision and even protecting other drivers’ safety? These all seem like good ideas. Maybe I need to research some advanced driving classes and improve my driving skills so that being on the road becomes more pleasant.”

How Are You Doing?

Have you started to see how this drill-down process works for little fears in real life? The idea is to uncover how things could change with mastery of the fear, and we do that by identifying the limiting beliefs around that fear that we can change. Changing a belief is sometimes easy and sometimes more difficult, but, just like a line of falling dominoes, once the belief changes, the fear does too.

From this process, I’ve learned that I would feel less afraid of distracted drivers if I felt more confident with my driving skills. Once I improve my driving skills, it naturally follows that I will be less afraid. That confidence is a sign of progress! Enjoy it!

Can this system work for you?

Like most systems, your skill with this one can improve with practice. It’s also best to start small and work up to the big fears. Using this three-step system to unpack the limiting beliefs around the fear – however big it is – is where and how you can take action.

You can do this.

No need to go it alone. If you would like to walk alongside us in your process, ask questions about it, or work best with FAQ in real life rather than online, please reach out here.

How To Overcome Your Inner Fears And Limiting Beliefs?

Maybe this article will help.